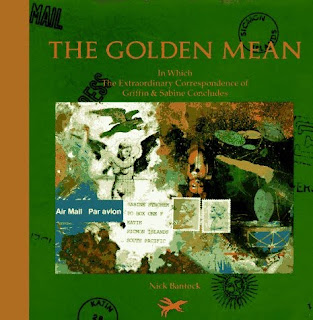 
«"Sabine, I was sure I understood. Yet you were not here when I returned and there was no sign that you ever had been here.... Today comes your card saying you were in this house for three days after my return. I am bewildered. I need you badly. -Griffin"
In this final volume of the phenomenal, best-selling trilogy begun with Griffin & Sabine and continued in Sabine's Notebook, the mystery of the two artists deepens, their questions grow more urgent. New obstacles (including a sinister intruder) test the tenacity of their passion, and in each letter or postcard, painting and prose are even more richly intertwined. Destined to be the most sought after novel of the year, The Golden Mean builds toward a powerful conclusion that will satisfy the millions of readers already entranced by the spirited, imaginative, enigmatic union of Griffin and Sabine.»